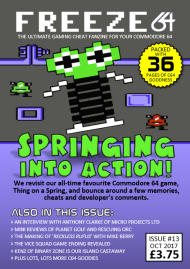 Here’s what’s in FREEZE64 issue 13: THING ON A SPRING COVER FEATURE: As we always do with each issue, we’ll take this cover feature game and look around the code, sharing what we find, and also providing a few new and exclusive cheats and features.

INTERVIEW WITH ANTHONY CLARKE: And because we are featuring the wonderful Thing on a Spring, we thought it would be apt to interview one of its creators, Anthony Clarke, who is also one of the geniuses behind Monty on the Run and Frak! Lots to talk about.

WE DON’T DO REVIEWS!: Starting from issue 13, we will be providing mini reviews of recent Commodore 64 releases, starting with Planet Golf and Rescuing Orc.

KENZ IS CASTAWAY ON OUR DESERT ISLAND DISKS: We dragged him away from his cubby-hole in the Binary Zone/Psytronik headquarters, and shipwrecked him on our Commodore 64 island. I wonder what Commodore 64 delights he has decided to bring with him.

GAME ENDING FOCUS ON THE VICE SQUAD: Released back in December 2013, this fantastic arcade game from the clever Achim Volkers and Trevor Storey has a game ending worth sharing with you… which is exactly what we intend on doing!

THE MAKING OF… RECKLESS RUFUS WITH MIKE BERRY: We’ve managed to hunt down (it wasn’t that hard really) Mike Berry who is the man behind Alternative Software’s 1992 hit, Reckless Rufus. A very revealing interview indeed.

GAMES IN THE MAKING: Continuing with this popular feature, we have news on the upcoming C64 game, Exploding Fish by Chris Stanley.

EXCLUSIVE POKES n’ CODES: There will be another helping of brand new POKES ‘n CODES for brand new Commodore 64 games.

SECRET SQUIRREL: Agent Squirrel delves into another batch of case files to review a few hidden secrets and messages within Commodore 64 games.

HACKERSOFT PADS: We’ll be flicking through another Hackersoft Pad and digging out some fresh and unseen cheats for you.