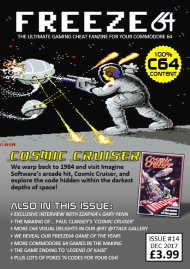 Here’s what’s in FREEZE64 issue 14: COSMIC CRUISER COVER FEATURE
For all you TRUE Commodore 64 fans out there, we warp back to 1984 and visit Imagine Software’s arcade hit, Cosmic Cruiser. We’ll be exploring the code and providing a bundle of cheats and features.

AN INTERVIEW WITH GARY PENN
Yes folks! In the next issue we have a new and exclusive interview with one of ZZAP!64 magazine’s original crew, Mr Gary Penn. We’ll be discussing his time at our favourite Commodore 64 magazine and finding out what REALLY went on in the offices of Newsfield.

DESERT ISLAND DISKS WITH CHRIS ABBOTT OF C64AUDIO.COM
We’ll be dumping Chris Abbott on our desert island and finding out what Commodore 64 comforts he’ll be taking with him.

FREEZE64 ‘GAME OF THE YEAR’
We’ll take a quick look back at some of the best Commodore 64 games of the year, and then crowning our favourite Commodore 64 game of 2017. I wonder what it could be?

@RT @TTACK IS BACK!
Most of you appeared to enjoy our venture into the Commodore 64 art world, and so we’re diving back in and showing off a few more fab pieces of scene artwork. We also interview scene artist, JonEgg.

GAMES IN THE MAKING EXCLUSIVE!
We chat to the delightful Vanja Utne at Pond Software and find out more about their new ‘candy’ platformer currently in the making for the Commodore 64. There’s also a bit of exclusive info regarding another Pond release!

AND ALSO… FREEZE64 wouldn’t be the same without more codes from another HACKERSOFT PAD, more exclusive POKES ‘n CODES, and finally, more revealing case files from our intrepid SECRET SQUIRREL.

You can see a video preview of the issue HERE.